Whatever Happened to Rachel Shiflet? 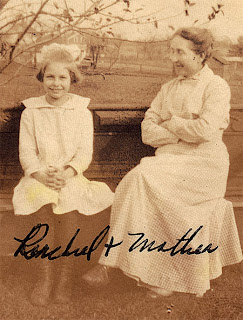 When my paternal grandmother, Esther Lavina Vore, was ten years old, a little girl named Rachel Shiflet (or Shifflet) came to live with the family under circumstances that were apparently never explained clearly or completely to my grandmother or her siblings. Rachel’s decade-long presence in the family is briefly recorded in a family history written in 1984 by my father’s cousin, Clarice (Vore) Dodge:


In the early 1900’s Jesse [my great grandfather] and his wife, Lavina [my great grandmother], adopted (although probably not legally) Rachel Vera Shiflet (b. January 7, 1908) in October of 1910 while they were in Bainbridge, Michigan. Rachel stayed with them until a few days before Christmas in 1920. It is not clear just why Rachel came to live with them as not much was related to the Vore children other than the impression was that Rachel’s home was not a fit place to bring up a child.1

Sure enough, twelve-year-old Rachel’s presence with the family is enumerated in the 1920 United States Federal Census, with her relationship recorded as “Foster Daughter”. Apparently the person providing the household information to the Census enumerator knew little about her birth family, as the birthplace of both her father and mother is recorded simply as “United States”.

From what little is written about Rachel in the family record, it appears that her departure was as sudden as her arrival, and that little if anything was known of her life thereafter. The mystery gives off a curious scent of adventure to the family historian. Where did Rachel go, and what became of her? And where, exactly, had she come from? I’ll reveal more of what I found in my next post.