During my trip to Ohio and New York two weeks ago, I made virtually no paper photocopies or prints, and yet I came home with a considerable array of records. Traditionally, information-gathering of this nature would have resulted in numerous photocopies from books and documents, as well as prints from microfilm, costing a small fortune in the process (most archives charge between 25 and 50 cents a copy for letter-size prints, and as much as $2 a copy for 11 x 17 inch documents).

Instead, I captured source records, whenever possible, using either a digital point-and-shoot camera or my portable Canon flatbed scanner. Instead of paying with wads of bills and pockets-full of change, I paid only in hard-drive storage space, which is a cheap and renewable resource, no doubt saving tens or hundreds of dollars in the process.

Since this was my first research trip, my efforts to capture data digitally were somewhat experimental. I found that while I could easily capture loose-leaf letter-sized documents using my flatbed scanner, it was very difficult to get large volumes to lay flat enough on the glass to get a clear scan, especially since flatbed scanners have a fixed focal range that poorly handles object depth.

For legal-sized documents, my flatbed scanner worked reasonably well, but since its scanning glass is only slightly larger than a letter-sized sheet of paper, I had to scan each document in two passes: the first pass to capture the upper three-quarters of the document; then, after rotating the document 180 degrees, a second pass to capture the remaining one quarter, and allowing a bit extra for overlap.

For large documents, I found that using the digital camera in macro mode (which allows the lens to focus to within a few inches of the target), taking multiple images as I moved across the width of the page, worked reasonably well. 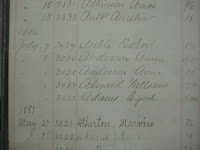 The problem I faced when I got home was trying to find a way to stitch these multi-image source documents back together. That effort is still ongoing, and I am learning techniques through experimentation with different software packages. 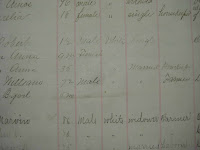 For the legal-sized pages, scanned with my flatbed scanner, the work is fairly simple. The digital images are straight, have a common focal range, and a fairly consistent amount of overlap. Windows Live Photo Gallery, a free tool downloadable from Microsoft, has a simple yet remarkably intelligent stitching capability which melds the two halves of legal-sized documents back together with no sign that they were ever anything but a single scanned image. 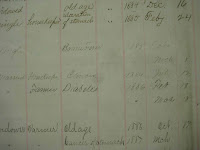 For the images I took with the digital camera, however, the problem is much tougher. As I swept across a page taking multiple images, invariably my focal range would change slightly, as would the camera angle, lighting, and amount of overlap between snaps. For this task, I have been using some more-advanced stitching tools in Adobe Photoshop Elements 8. These tools allow me to reduce or eliminate variations in camera angle and even the small amount of "fish-eye" effect introduced by the camera's macro processing. To see an example of this, the death entry for William Aylard in my previous post is actually a compilation of three separate camera images that have been "normalized" by Photoshop Elements.

I have included the three component images here so that you can compare (both these component images and the composite image in my previous post have all been reduced in size). After merging, I crop the resulting image to eliminate the mismatched areas along the edge of the merge. The result is reasonably convincing, I think. And as I work with these techniques more, I can use my gained experience to take better original images next time, ensuring better results with a smaller time investment, and even more saved cash.

I have republished this post from my previous blog, Aylard Family Research.
Posted by Aylarja at 10:50 PM