The setting sun, muted in Midwestern haze, bathed an endless patchwork of square fields in a soft orange glow as my plane descended from cruising altitude. Only the occasional river slithering carelessly across the landscape seemed to defy the uniformity below. As the plane arced out over Lake Erie in its approach to Cleveland Hopkins International, whitecap standard-bearers lead a formidable armada of waves far below. I wondered what my ancestors would think: the wild frontier that once lured them westward with the promise of open land, now mastered, just a few short generations later.

And it was to better understand their movements that I came here: briefly to Ohio, at first, and then on to New York state. I did not expect to uncover any groundbreaking revelations, and so far I have not. But I hoped to begin to add some detail and color to the faint sketch of knowledge that I had. And I have gained some of that. 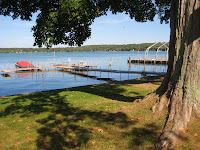 My plane arrived Saturday evening, and after an overnight stay near the airport in Cleveland, I trekked 350 miles across the southern shore of Lake Erie, through a tiny strip of Pennsylvania, and into the heartland of upstate New York. My destination that afternoon was the small town outside of Ithaca where my father's cousin, Dr. Stephenson, held a trove of photographs from the Barr and Vore side of my Aylard heritage. He also has a storehouse of knowledge based on at least a dozen years in which he dug into the dusty shelves of old documents and reels of microfilm to do the same sort of thing that I am doing now. And he had some firsthand knowledge, as well, having spent time with his Vore grandparents, who are my great grandparents.

Dr. Stephenson and I spent several hours scanning several large envelopes full of family photographs. Most of them had some level of identification associated with them, but others, sadly, did not. He thought his mother could have easily identified most of the mysterious faces that we could not. But as with many things, realizations such as this often come only when the opportunity is gone. Nonetheless, we scanned these anyway in the hope that perhaps one day I could identify some of them.

One of my favorite photographs, for reasons that are not entirely clear to me, is one that I did not even conceive could have existed until just a few short weeks ago when I saw a copy of it in a PDF file that Dr. Stephenson had compiled nearly ten years ago. It is of my 2d great grandmother (my father's mother's mother's mother), Calista Samira Fields, who married my 2d great grandfather, John Hiatt Barr. Calista married John when she was barely nineteen, bore him five daughters and a son, and then died after a short illness at the age of forty-one.

After spending the night in Ithaca, I drove north through the aptly named Finger Lakes region to the small town of Lyons, New York, the County seat for Wayne County. My 2d great grandfather in my direct Aylard line, William Aylard, migrated to the small community of Palmyra, about fifteen miles down the road from Lyons. I spent most of the day there in the office of the County Historian performing research into the 1855 New York State census, and into church records for three of the major churches that existed in Palmyra when William and his growing family lived there. I will try to provide more information about this visit at a later time, as I plan to return there again tomorrow for further research.

I have republished this post from my previous blog, Aylard Family Research.
Posted by Aylarja at 6:50 PM